Magic, Madness, and Sadness Part II - The Self-Imagined Self

Gently down the stream,

Life is but a dream.” - Row Your Boat, Eliphalet Oram Lyte. 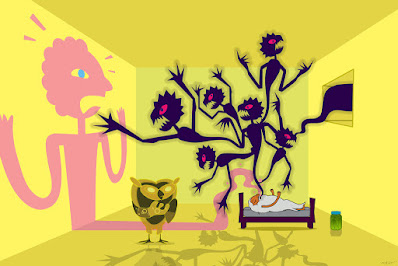 There are many paths to immortality through the ways of magic. The dark apotheosis Liches undergo is the most well known, but the other schools of the arcane provide alternate means. Magicians stand apart from others in the world. With the means at their disposal to (eventually) bend reality to their whims, they often find that the needs and desires of those who surround them seem bridled by comparison. With the capability to nurture dreams and ambitions beyond the ken of others, they eventually can become something other than mortal. 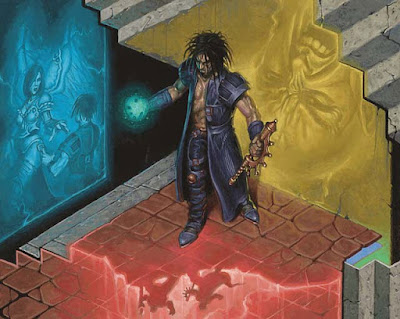 Illusionists are considered by sages to be the most creative breed of mage. Pulling the raw power of magic into the form of phantasmal visions, smells, and sounds, Illusionists act as the host of numerous attacks on the senses of others. Using their own ability to conceive of the impossible, the lies of the Illusionist can eventually become nearly indistinguishable from material existence. There is a limit to these fantasies. Reality resists the intrusion of mortal will upon it’s fabric, and eventually saps the power away from all but the most simple or mighty of their spells. Faced with the corrosive influence of corporeality upon their works, Illusionists of sufficient potency retreat into a place where they have perfect control: their imaginations. Painstakingly constructing a realm within their own mind, the Illusionist pulls themselves into it, and drifts off into a permanent sleep.

Unlike my article on the Beholder, there is to my knowledge no monstrous analogue within D&D for us to build off of. There is a contemporary character in fiction however, Prismo! As an aside, Adventure Time’s concept of Magic, Madness, and Sadness is a major influence for this series of articles. Needless to say, major Adventure Time spoilers follow. 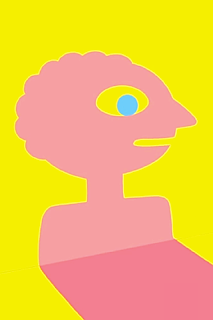 For those not in the know, Prismo is a Wish Master residing in a strange, cube-like void at the center of the multiverse. A gregarious sort, Prismo is bound to grant any being that manages to make it to his realm a single wish—though they are done with an, “ironic twist,” according to him. Prismo himself is the product of an old man’s dreams. When his sleeping form is awoken and then slain by the Lich, Prismo is slain as well. Even if Old Man Prismo had not been slain, but merely awakened, Wish Master Prismo would have been disabled for a thousand years. 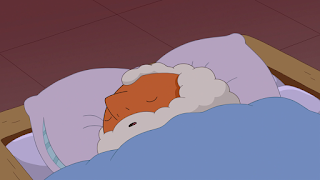 Unless the tone of your campaign is of a god-slaying bent, Prismo or cosmic-level beings like him are rightfully beyond your players. However, the Dreamer provides a fairly rough approximation of something akin to a Wish Master on a level that PCs may be able to contend with.

Once there was a thoughtful maiden

...who broke her mirror, and dropped the pieces on the ground.

She thought to repair it, but was arrested by the sight of the shards

...which showed so many visions of her face.

She put the pieces back together at all the wrong angles

...and delighted at the image of herself. - Scroll of the Monk, Exalted 2nd Edition.

Sleepers or Dreamers become a figment of their own imagination through means of a process known as the Ritual of Slumber. They linger corporeally as sleeping forms somewhere, secreted away behind veils of magical deceptions, never to awaken again. The Sleeper can affect their old reality through the medium beings they have conjured up, but these things are not the person they once existed as. These thought-forms, called Dreamings, are reflections of the Sleeper’s desires or needs, and often have strange appearances and bizarre personalities. While potent, Dreamings are limited to mental or illusory effects. Sleepers give up their ability to use magic to make truly real changes once they begin their slumber.

Sleepers make for formidable, if unpredictable, allies and foes. Able to beguile nearly anyone, and having the ability to exist within multiple locations at once in the form of their Dreamings, Sleepers can ensorcell entire communities, or bewitch entire regions with perfectly crafted illusions. Unfortunately, Dreamers inevitably go mad. Their isolation, coupled with their godlike power within their own dream, causes them to rapidly descend into solipsism or to fracture into multiple personalities. While able to be treated with in their dreamscapes by powerful Enchanters or creatures like Hags or Baku, these visits from outsiders are just brief interludes to their endless self-reflections. 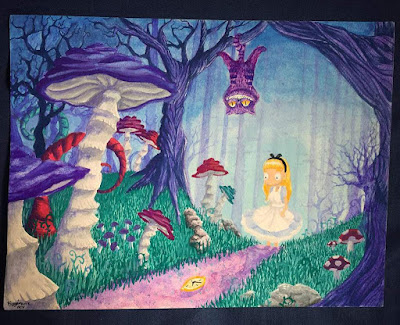 Dreamings are similarly affected by the growing madness of their creators. While the self-aware figments of a Sleeper’s mind may start off as being patterned after creatures or individuals that they knew in life, Dreamings devolve similarly into things that simply should not be. Impossible configurations of eyes and wheels, eerily beautiful humanoids crafted of molten opal and amber, multi-faceted voids which scream commands in languages which have not been spoken aloud in thousands of years, all of these and more have been observed by sages.

Sleepers can still cast spells, and generally do so as an Illusionist of 17th level or above. They never require material, verbal or somatic components to cast their spells, but otherwise follow all other standard rules for Magic-Users. Almost all Sleepers can be defeated by simply waking them up, or murdering their slumbering form. If awoken, a Sleeper must perform the Ritual of Slumber once more to return to their dreaming state.

Dreamscapes respond to their creators whims without the need for casting spells, and any effects which are conceivably within the realm of Illusion spells can be performed by the Sleeper at will. Dreamscapes tend to shift over time as the Sleeper explores new avenues of themselves, or gains new experiences by conversing with their Dreamings or others. Dreamscapes collapse if a Sleeper is killed or awoken.

Dreamings have the same mental statistics as their creators, but can conceivably use any creature as the basis of their forms, and thus physical statistics. Dreamings have the same capabilities as their creators at spellcasting. While Dreamings can be slain, the Sleeper can simply imagine more to replace them. Creating a new Dreaming takes a Sleeper a number of hours equal to the desired hit die of the being. Once created, Dreamings are independent beings with their own desires, views and memories. A Dreaming can always enter their creator’s Dreamscape by slumbering, and may enter the realm bodily or as their dreaming self. Sleepers may always communicate telepathically with their creations and vice versa. Sleepers may also use a Dreaming’s senses as their own. If the Sleeper which created a Dreaming is killed or awoken, the Dreaming immediately winks out of existence.

Roll on the tables below to develop Sleepers, Dreamscapes, and Dreamings: 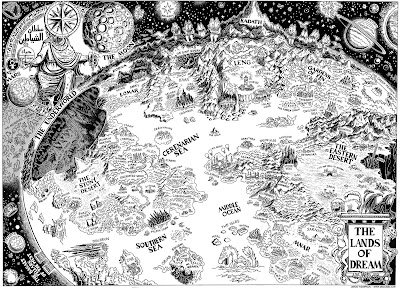