B'gutym, the Land of Grass and Stones, Vol I -- A Thousand Thousand(er) Islands Part I Fording Five Rivers to the North

The only sound is a gentle song winding through the burial mounds. As you approach a wall, a voice from nearby mumbles to you, “Quiet, or they’ll hear you.”

The land of grass and stone is an unforgiving place, loathe to give up its bounty to the people.

There was a king who ruled B’gutym long ago named Dihargai. Dignified and learned in the arts, the ruler delegated the tasks of governance to his wiser servants while he spent his time attempting to bring joy to the lives of his people.

At first, the king thought to bring his subjects happiness by offering them silks and jewels to wear. The people scoffed at him, and traded the baubles and garments for food and timber.

Undeterred, Dihargai brought priests, philosophers, and sorcerers from far and wide. His people laughed at their strange ways and scorned their teachings.

The king heard his people were hungry. He sent his servants to fetch fine fare and to bring foreign beasts to his land. The people were unimpressed, preferring the flesh of deer, goats, and boars.

Despairing at his failures, the King began to warble mournfully, the court musicians unable to cover up the sound of his voice. The people gathered around him, intent on hearing the melancholic song. Seeing they had failed their ruler by rejecting his gifts, the subjects took up their king’s song, and they accepted it as their gift.

“If you lose sight of me, you’ll wander around out here until you die,” the guide cautions you.

Meadows as high as an adult’s chest, broken only by barren crags and occasional trees. The clear blue sky yawns out in all directions. You feel agoraphobic by just looking around. Grass stretches all the way up to the shore to the south and east as if threatening to march into the sea.

Groups of deer, wild boar, and flocks of birds teem out in the fields. Bands of hunters follow behind, smoking their meat, tanning their hides, and only rarely returning to a village. The trackless expanse claims the lives of the overconfident, the unprepared, and the foolish. The night wind often carries the dead’s sonorous calls for aid.

Wise travelers ply their ways on trails dug deep by wagon wheels, escorted along by locals. The outsiders speak a hundred different tongues, their caravans are pulled along by a dizzying array of beasts. They bring wonders from across the world. 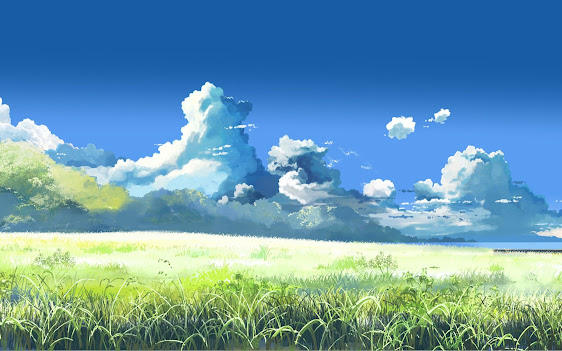 Encounters in the Plains

You have been wandering for what seems an eternity. The uniformity of the rolling meadows is finally broken by the appearance of: 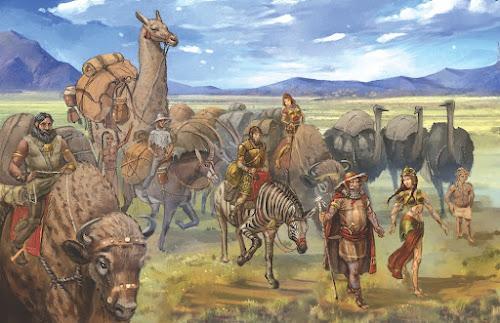 The caravanserai is crowded with dozens of vagrants, pilgrims, and merchants from the road. The tents have gone up for the night. In the cool of the evening you meet:

And they are looking for:

And they share what they’ve heard of the locals: A stone wall as tall as a man surrounds a cluster of buildings. Conversations are terse. Villagers hush those in the open who do not whisper, and muzzle those who yell.

The walls are cold, perpetually moist, and covered in a thick coating of bright teal and yellow colored moss. There are no guards.

“If you don’t know where you’re going, the caravan master is over there,” says the old man waving you off when you try to ask for directions.

Narrow paths snake through wide, circular buildings made of stacked granite and slate. Smoke from cooking fires fill the alleys with soot, and the smell of deer, goat, and boar meat.

Work songs ring through the fields of sorghum and millet during the day, with tall tales and family histories quietly whispered to the assembled clan at night.

You step off of the trail and into the cramped alleys of the squat stone building. There are more residents than there are houses, with the remainder living in thatched huts or tents.

A commotion is happening nearby: 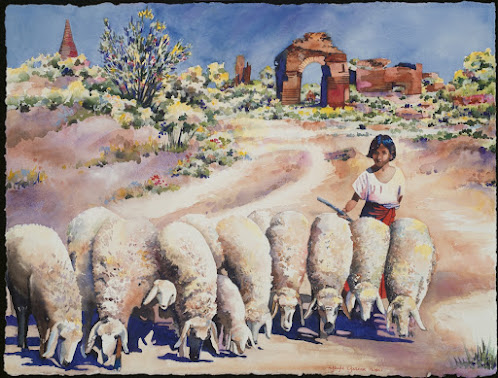 Villages in B’gutym are like small towns you never can leave. Everyone comes home eventually.

Clans are led by Ancestors, who transmit their will to Elders. Elders command Adults to carry out their bidding, and Youths learn at the feet of everyone. It is the way of things.

Murder is very rare in the land of grass and stone. Exile and mutilation are far more common. Judgment is doled out by the age group above you. No one judges ancestors except their own.

Outsiders are kept at arms length. Trade and tribute is important to the land of grass and stone, but foreigners break taboos and they never come back after death. Are they even real? Who knows.

This particular member of the village:

And has a problem with:

And is adorned in:

Almost always drunk on rice wine while in town, the sun-baked and ruddy faced Narantuya does not strike a cutting figure.

While on the hunt, Narantuya is a different woman. Her tread is silent. She never needs more than one arrow. She sometimes speaks to the ghosts of her kills out of guilt. They’ve started to answer.

He doesn’t listen to the stones anymore. Bayar made that mistake as a young man; the laughing rocks took his arm to the elbow. The death speaker gave him his limb back, in a way.

Bayar’s new arm can smash rocks apart on it’s own. He digs through the stone himself, and leads his work crew to the riches within.

The escape was supposed to be simple. They traveled west from Qelong, then stole a case of raw opium from a plantation in Sughd. They dodged the bounty hunters, and somehow arrived intact.

Their meeting with a small group of villagers flanking a silent mummy did not go well. Yishu is not allowed to sell their stock nor leave. The slug-man is growing desperate.

Wherever there is trade, there are those who take advantage of it. Walinong was taught the ways of extortion by her father and uncles. She was taken on her first raid at eleven.

They are all dead now, but Walinong is thriving. Her family whispers the young woman the locations of foreign caravans, she and her band of leg-breakers “escort” them. Life is good.

Jargal views himself as providing a necessary service and as an unsung hero. Hates death speakers, especially weretigers.

Zolzayaa buys only the most cleanly killed beasts from the most reputable hunters. She makes them tell her the story of how the animal died. After that, it is just a matter of calling their spirit back.

The animals Zolzayaa preserves with her tools and tinctures serve as her servants out in the grasslands. She is a spy for one of the Nine Score Kings. 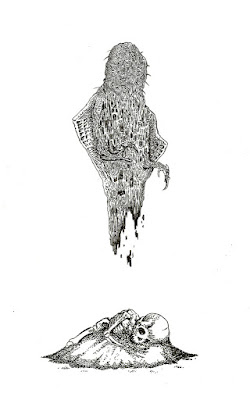 Howdy there folks! I know I have been quiet for a few weeks, but I’ve been working on these two new locations for the incredibly well-written and illustrated Thousand Thousand Islands by the talented folks over at Centaur Games. A huge shout-out to them for giving me the permission to post these. I figured I’d lead with the more Halloween-themed of the two, and I should have the second part of B'gutym up in a couple of weeks. Please be sure to let me know what you think, and as always, thanks for reading!

All art is the property of its respective owners and will be taken down at their request.