Who Killed the Mayor? 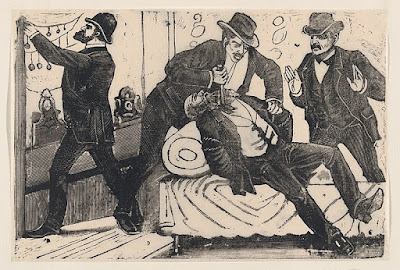 Murder is easily the most serious crime that humans are capable of, at least on a personal scale. It deprives another of their very existence. Certain settings trivialize this to a one degree or another, but even campaign settings with the most liberal of interpretation on resurrection still attach great weight to death and murder. Murder comes in as many varieties as there are victims, from the coldly calculated assassination, to the robbery gone wrong. They're committed by individuals, groups, and sometimes even entire organizations. As long as there are three people left in the world, odd are one of them is going to want one of the other two dead.

The seventh in my overall series on rolling up the goings on of a city, this entry focuses on rolling up a murder at random in the city at large. These can be used to kick off a plot based around a murder investigation, suggest the activities of some nefarious group, or even to just use as the backdrop of a particularly gritty world. To use this generator, simply roll 4d8. 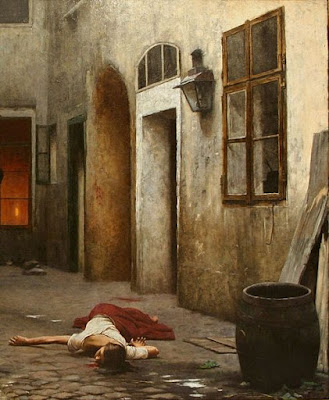 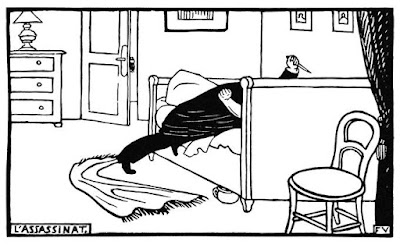 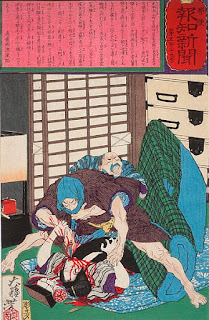 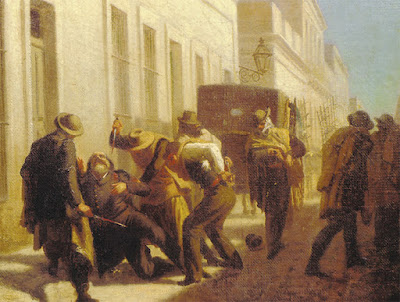 Cruel folk, and skillful to destroy. 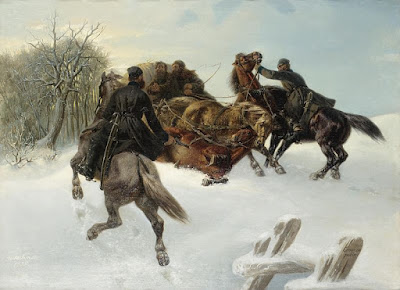 There are always those who do not fit in with society. Perhaps they are unwilling to bow to the requirements of others, or they could have committed some terrible offense or crime and were cast out. These folk have little choice but to turn to pilfering, robbing and murdering to survive without a community to support them. These folk quickly become hardened and brutal from their experiences, their former lives drowned under the waves of screams, terror and death that their survival requires. The bands they form often become infamous, attracting more doomed souls to their banners, usually they either tear themselves apart or are annihilated by those they've victimized, but some of these ragtag groups manage to claw their way into the "respectable" life of a mercenary or soldier.

The sixth in my series of tables on how to roll up a community entirely from scratch, this one focuses on bandits, marauders and other road agents which may bedevil your group. Like the others, I've specifically left out any demi-humans, as well as most elements which explicitly call out the nature of the setting - with the exception of the 'Unique thing' table. Like the others, these tables are used by simply rolling 4d8, and then resolving any nested rolls with d4s. 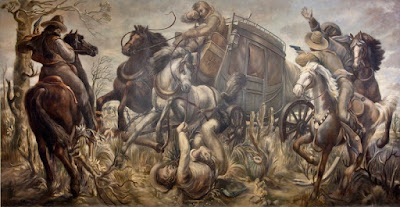 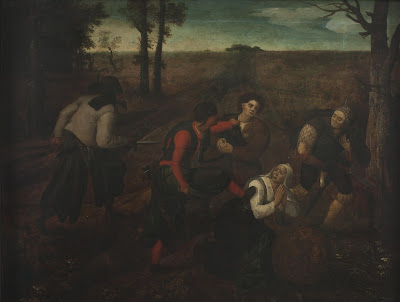 I kicked off this series by going over the enigmatic Chun the Unavoidable, a singularly horrifying character in the mythology of the Dying Earth. This article will focus on one of the most commonly appearing creatures in the setting, the vicious beastmen known as Deodand. This hungry fellows show up in nearly every story set within the world, and they are common enough that every character has seemingly heard of or had first hand experience with them. I have found some OSR-compatible stats for Deodand in White Dwarf 58, but I felt that it'd be more fun to come up with my own for both Basic & 5th Edition. The Dying earth is overrun with various beastmen, most of whom are given only this brief description: 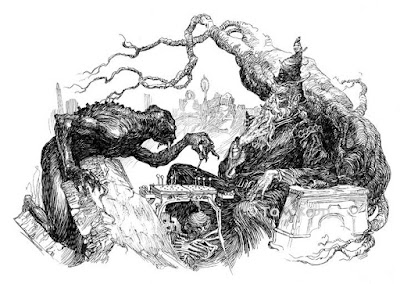 Of the six creatures mentioned, only the Gid and the Deodand appear directly at any point, and only the Deodand is featured multiple times. (As an aside, I really love that the writers of Zork straight up stole Grue.) In our reality, deodand is an animal, person or thing responsible for a person's death, and this name is perfect for how they're seen by others. Objects of fear and dread to the non-wizardly inhabitants of the Dying Earth, Deodand are are persistent threat to anyone walking alone at night or in deep woods who is not armed with magic,

“A black figure stole into her sight, creeping along the ditch. In the light of the fireflies she saw him—a Deodand, wandered from the forest, a hairless man-thing with charcoal-black skin, a handsome face, marred and made demoniac by two fangs gleaming long, sharp and white down his lip. It was clad in a leather harness, and its long slit eyes were fastened hungrily on T'sais. He sprang at her with an exulting cry.” 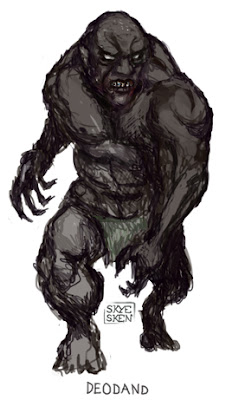 Oof. Now, obviously the idea that the cast of the Dying Earth being menaced by bestial men with charcoal-black skin can construed as problematic. However, the Deodand, while similar to humans, are utterly alien in both mindset and lifestyle. They seem to simply rove the wilderness, stalking any they find and pursuing them to their homes and beyond. Deodand fear little beyond magic,

“The Deodand outside had lingered, and had been watching through the iron-barred window. Now it knocked at the door.
"Who's there?" called the man in the black hood, twisting about.
"I desire the one who has entered. I hunger for her flesh," said the soft voice of the Deodand. The man in the hood spoke sharply.
"Go, before I speak a spell to burn you with fire. Never return!"
"I go," said the Deodand

Boogey-man like in approach, the Deodand wishes nothing more than to devour anything it comes across, and speaks with the typically erudite style which define all of Vance's characters,

“You have no control over the grisly appetites of your fellows?” Cugel demanded.
“I have no control over my own,” responded the deodand. “Only the fact of my broken limbs prevents me from leaping at your throat.”
“Do you wish to live?” asked Cugel, putting his hand significantly to sword-hilt.
“To a certain extent, though with not so fervent a yearning as do true men.” 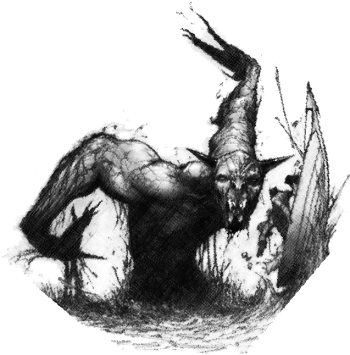 Berserk Rage. While it has 10 or fewer HP, Deodand have advantage on attack rolls, and deal an additional +2 damage with their claw attack.

And what of the people there? 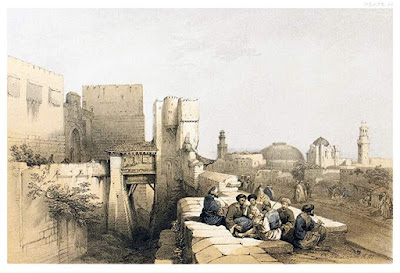 A wild and dizzying array of cultures can exist in any fantasy setting, from savage nomadic tribes, to learned and cultivated scholars. Existing side by side and contending with one another with concerns and forces that we ourselves never had to adapt to, their solutions and ways of living can be as strange as our imaginations allow; governance by the ghosts of their ancestors, living atop the backs of great stag beetles, under the yoke of a dragon, the possibilities are endless. These groups war, intermix and render themselves anew. 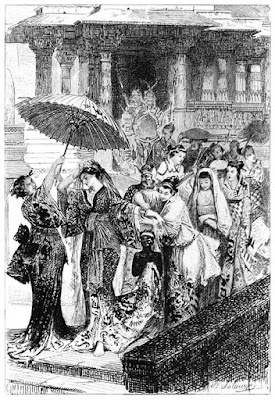 The fifth in my series on rolling up a community through tables, this entry focuses on the overall structure of the polity itself, how it conducts itself, what it values and how they interact with the world around them. It can be difficult to craft fantasy societies without resorting to either stereotyping or riffing off of real world cultures. My solution to this was to mix the overall qualities until the end result is more than simply 'Germans/French/English...but' by dint of their random nature. I specifically did not mention any kind of humanoid, such a Dwarf, Elf, etc. as to keep these tables as setting neutral as possible. To use this table, roll 4d8 and then resolve and further results with 1d4s. 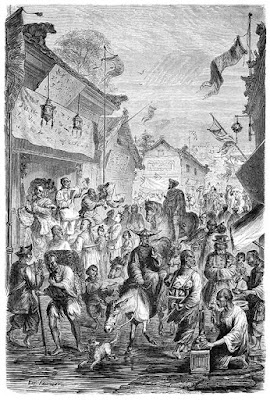 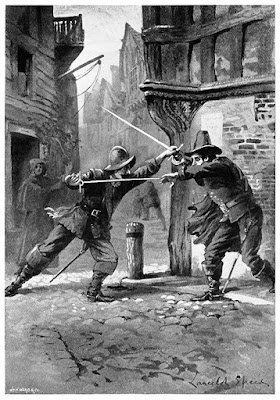 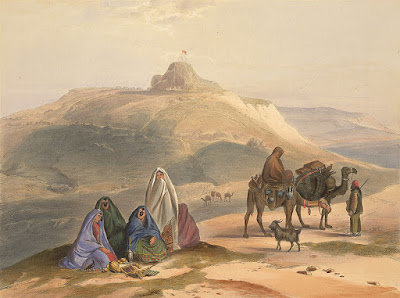