Magic, Madness, & Sadness Part I - All Eyes on the Beholder

"As you once did for the vacuous Rom, grant us eyes, grant us eyes. Plant eyes on our brains, to cleanse our beastly idiocy." - Micolash 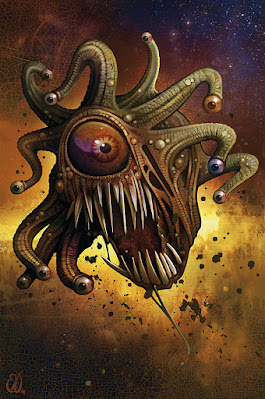 Beholders, along with Illithid, Slaadi and Displacer Beasts, are among the most iconic of D&D’s non-licensable monsters. They have been featured on multiple covers of the core rulebooks, including 5th edition’s Monster Manual. They also come off as disjointed and out of place in many settings. Like many monsters, Beholder’s particular origins usually boil down to one of two sources; they’re from another plane, or they’re just sort of there. 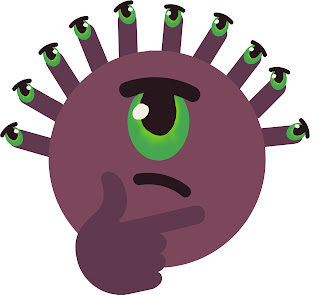 This is not to say that these explanations are insufficient, but rather there could be a greater attempt to integrate Beholders more deeply with the setting around them. Their shallow place is a shame, because Beholders are bad-ass. Here’s their B/X stats:

The creature’s eyestalks and eyes are also protected, although less well (thus the armor classes of 2 and 7 respectively). Because of its particular nature the beholder is able to withstand the loss of its eyestalks, these members are not computed as part of its hit point damage potential, and lost eyestalks will eventually grow back (1 week per lost member). The body of the monster can withstand two-thirds of its total damage potential, while the great central eye can withstand one-third this total, i.e. a beholder with 45 hit points can withstand 30 hit points of damage to its body before being killed; the eleventh eye can withstand 15 points before ceasing to function. Eyestalks take from 8 to 12 hit points each before being lost. The body of a beholder represents 75% of potential hit area, the central eye and the eyestalks 10% each, and the 10 small eyes 5%.

The various eyes of a beholder each have a different function: 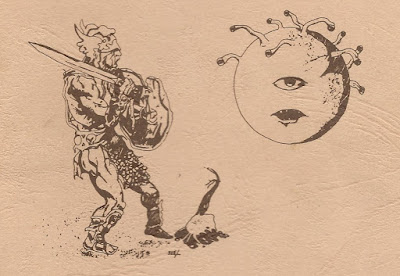 Let’s be real for a moment. Beholders are simply bizarre looking. They are large, hairless, levitating cyclops heads with snake-like tendrils on their scalps ending in eyes. On top of this, all of those eyes are magic. If one takes a step back from the fact that they have become normalized, it really sets in how oddball they are. Unlike many monsters, Beholders do not have any literary or mythological origins to ground them, and while they have an entire book dedicated to them in the form of I, Tyrant and a chapter in Lords Of Madness, those do little to actually connect them to the average campaign setting.

I don't dislike Beholders, but I wish they were more a part of the world around them. So in the vein of my previous articles on Werewolves and Doppelgangers, we’re going to look at a piece of related media for some inspiration. In this case we’re going to look towards the game Bloodborne. 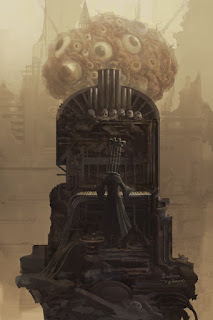 For anyone out of the loop, Bloodborne is a game by FromSoftware, and is a spiritual successor to the Dark Souls series. The main character is an outsider to the accursed city of Yharnam, searching for a miraculous cure to a mysterious disease that they are suffering from. After an ill-advised blood transfusion at a local clinic, the PC is ushered into a tale of Lycanthropy and Lovecraftian madness—infected with a supernatural, body-warping disease by the tainted blood coursing through their veins. With a few exceptions, almost every enemy in Bloodborne was once human. From the grossly distended limbs of the villagers turning into werewolves, to the massive Cleric Beast and Vicar Amelia, all of these monsters were once just like the player. By tying the source of enemies to what were once humans, the warping effects of the otherworldly Great Ones becomes all the more terrible to us. 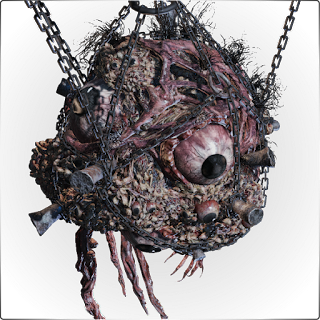 To bring this back to D&D, we can fight against the game’s general tendency to grasp for planar, or explanations that are otherwise taken as a given. Instead of creatures which have been created wholesale, Beholders are beings which have created themselves. They are the self-directed products of a magical arms race.

“Remain wary of the frailty of men. Their wills are weak, minds young.” - Vicar Amelia 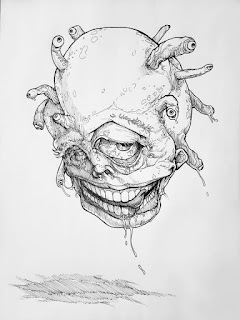 Beholders are neither creatures from the Far Realm, nor the spawn of some "Great Mother", but rather men and women desiring power beyond their grasp. Many magic-users desire immortality. There is so much to learn, and a lifetime is simply too short to do so.

Not every magus is well-versed in the dark arts of Necromancy. For Transmuters, there is always the temptation to replace the weak flesh that they were born with, to improve it with enchantments that stretch their form past the boundaries of what can be achieved by a mere humanoid. Discarding the unneeded parts of themselves like so much dross, the magician grows distant from their natural form, winnowing their bodies into both a weapon, and a vessel to last them through eternity. The limbs are generally the first to be altered or removed. They are largely unnecessary to a being that can float or fly, and there is little that they can achieve that magic cannot. Changes are made without regards to societal norms or aesthetics. Favored spells are folded into the design of the increasingly utilitarian form of the magic-user, most easily in the form of eyes that exude spells at a mere glance.

Sorcerers are arrogant by their very natures, and they often underestimate the effect that these sweeping changes will have upon their minds. Growing ever more distant from the humanoid experience, their minds begin to break under the strain of the inescapable unfamiliarity engendered by their unique bodies. As they lose their grip on sanity, their original motivations for seeking immortality in the first place begins to fade. All that is left is the naked pursuit of power, and the triumph of utility over aesthetics in their own bodies. These beings are known as Beholders, due to the fact that their eyes generally become the source of many of their abilities.

While each Beholder is a unique being, sages speculate that there is some template, or set of common spells that are drawn in their creation, but it could also simply be that abilities such as permanent levitation and an anti-magic care are just too good to pass up. To see what form the Beholder takes, roll on the table below. 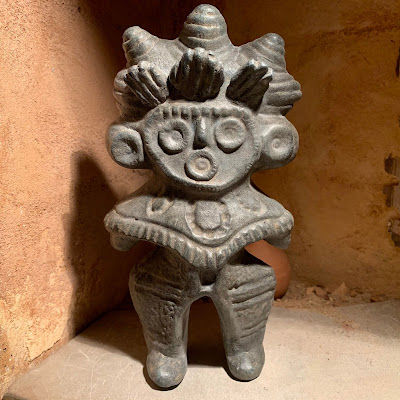 Beholders are quite mad. Their forms are far beyond what most mortal minds are meant to handle, and the pain of their self-experimentation often claims the rest. Much like the Beholders themselves, while they are unique, there are also patterns in the types of madness that they exhibit.

To determine what powers the eyes of the Beholder possess, roll on the table below 10 times, ignoring any duplicate results. Every Beholder otherwise possesses the ability to levitate, as well as an Anti-Magic cone centered on one of their (generally many) eyes.

So, this is the first in a multi-part series detailing various means by which Magic-Users attain immortality. I'm planning to do a take similar to this for each school of magic, but we'll see how that goes. As always, thanks for reading!