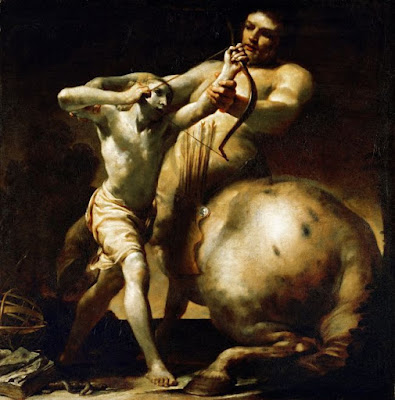 Wild and untamed by even the standards of what little civilization that exists on Nysa, Centaurs were, and still are, seen by Nysans as possessing a purer way of life than the rest of populace. Even with their seemingly exalted position, they were kept largely at arm's length, and generally only tolerated in the vineyards and towns during festivals. Seen as uncontrollable, especially while under the influence of wine, the Centaurs found themselves pushed to the plains surrounding the Lykaion Woods and into the embrace of the Limnio.

The fall of Nysa did not affect their lifestyle, except to remove the last checks upon their behavior and allow them to descend into barbarism with the rest of their vintage. Their dark reputations aside, Centaurs are known to be strong, martially inclined creatures, well suited to a life of adventuring. 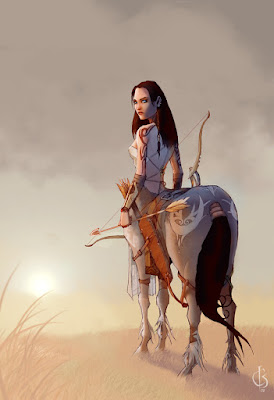 Larger and possessing both a frame and legs far different than others humanoids, Centaurs are subject to several special rules. Centaurs may not climb objects such as ladders or ropes without great difficulty, suffering a -4 penalty to all such attempts. Any armor that a centaur has made for them costs double the normal price. They cannot use armor designed for humanoid or equine use.

Centaurs are far quicker than humanoids, and are gifted with a movement speed of 50' in a round in combat. Owning to their large size and quadrupedal nature, Centaurs gain a bonus of +50% to both their carrying capacity, and the amount of weight necessary for them to be suffer an encumbrance penalty. They may carry others, but their passengers reduce their speed by 20', and those riding them do not gain any bonus for being mounted.

Centaurs are extremely skilled archers, gaining a bonus to all attacks they make with bows or other similar weapons, as reflected by their Archery bonus on their class table. In addition to this, Centaurs also gain a bonus to any damage rolls that they make with primitive or otherwise improvised weaponry such as stout branches, rocks, or stone weaponry.

Email ThisBlogThis!Share to TwitterShare to FacebookShare to Pinterest
Labels: A Death in Nysa, B/X, Classes, Lamentations of the Flame Princess, Old School Essentials