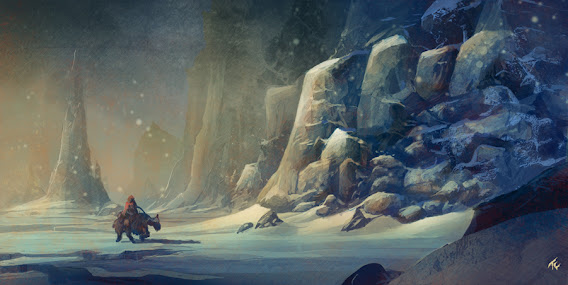 The Peaks of Supine Gods

Gold, silver, jewelry, and spices are piled high on racks behind a man wearing rough furs. Gesturing with a dismissive hand he boasts, “Mere baubles. I carry my glory in my veins!” 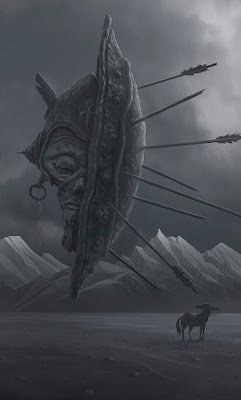 “Trust me, I heard it from someone whose been there,” mutters a drunk at the wine sink. 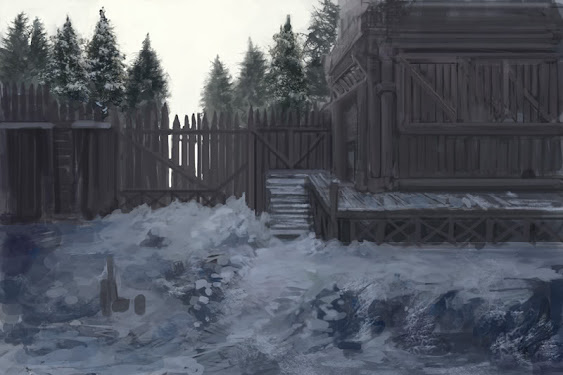 Snow-capped peaks soar from side to side, making the valley seem all the more secluded. Farmers in carefully tended and walled homesteads stop their labors to peer sullenly at visitors.

Banners of brightly-painted and patterned cloth mark the boundaries of a tribe’s territory. Outsiders are shadowed by scouts mounted upon stout looking ponies.

In one village, clothes, flags, and homes are decorated with intricate patterns suggesting the shape of a hawk. In the next village over, it is the shape of a deer. The one after that, a wolf. Every village is different. If you ask, they will tell you they owe the animal their well-being.

The people here show no fear of foreigners. Visiting nobles are treated with no more respect than any other foreigner. Even kings must wait their turn in Dinsu. There is no hurry to anything. The normal worries which bedevil a community aren’t present here. No one is ever on time.

Somewhere in the village is a building surrounded by layers of talismans and rings of protective wards. That’s where the God is held. 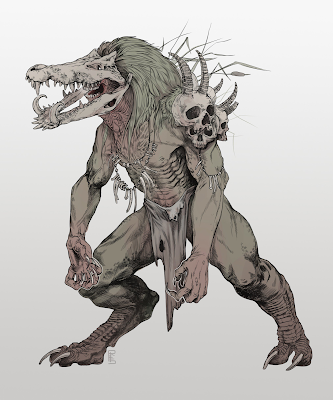 In this Village, the captured god takes the form of a:

Through their enslavement of a divinity, the people of this village gain for themselves:

In recompense for this blasphemy, they must suffer through:

There are ways to increase the powers that the blood of gods in oneself, namely by consuming more of it. Blood Witches know of more precise methods. No matter what power they managed to wring from their captive divinity, no spirit or god will ever regard these folk as anything other than scum.

If the god ever escapes, it will not rest until every single person of the village is dead. 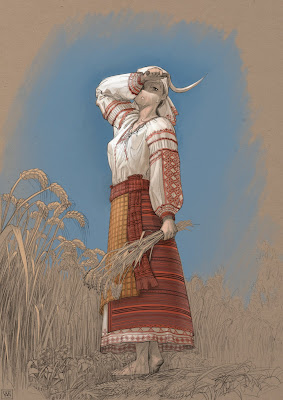 United by their sins, the settled people of Dinsu are close-knit and conspiratorial. They whisper behind your back, and shoot one another glances when you commit a faux pas. No one corrects you.

If they catch view of holy symbols or idols, they may hiss, or even exhort you to toss it away. They might even go missing the next time you go to sleep.

Sparse quarters are traditionally set aside for visitors. Trade is a matter of survival for the people who live here but the politeness is always grudging.

Today, the village is abustle with:

On a set of doubles, a small group of nomads is present, and are doing carousing and exploring of their own. 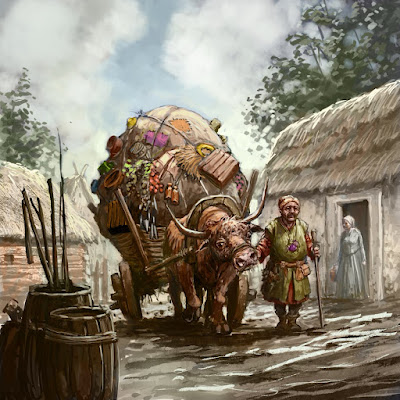 The villager you’re speaking to is dressed in:

They happen to be preoccupied with:

Outsiders are tolerated but never embraced until they ask if they can gain the blessing of the god. Then the initiations and trials can begin. In this village they bring others into the tribe through:

Asks where you come from. Where you’re going. Bids you to describe the shape of the land of your birth to him. He’ll dream of it for the next three nights, and then know it as well as you do.

Quick hands. Quicker eyes. He can sketch things as you describe them to him. His store is a dilapidated shack on the edge of the settlement full of ink-pots and half-finished maps. He’ll sell you them, but you have to give him enough to make a replacement for what you’re taking.

She waits at the base of a mountain pass, sauntering up to the campfires of foreign travelers. She knows a thousand ghoulish stories, each more lurid than the last. After she tells a few, she makes her pitch, “Let me take you up. It’ll be a lot safer that way.”

Most of the trips are uneventful, and except for the sense of being watched, safe. Some end in screams, blood, and half-chewed corpses. The untamed God she’s in league with rewards her well and they’ve both prospered.

“See how the birds fly in patterns, and the plants have prayers written on their leaves? They’re nearby.” Every scrap of skin has been scarred or tattooed with either a protective sign or sliced open and had a charm inserted underneath.

He looks over his shoulder constantly, and he never relaxes unless his back is to a wall. He’s not allowed to pay for anything in town. His father died before 30. He likely will as well.

She dresses so gaudily that when the light catches her jewelry you fear you might go blind. She clinks audibly whenever she takes a step. Even her teeth are made of gold.

The secret to her wealth is simple: she knows a song her mother taught her which steals gold. Its never from someone she knows. It disappears from royal vaults, coin purses, or right before astonished merchants eyes.

He seems to know the resting place of every stone, the curve of every trail, and the habits of every animal in the mountains. He never speaks, but always smiles, as if sharing in some private joke.

Kuldeep traded his voice away to a witch in order to awaken his blood even further, granting him the ability to sense sentient minds. If he concentrates, he can hear your thoughts. 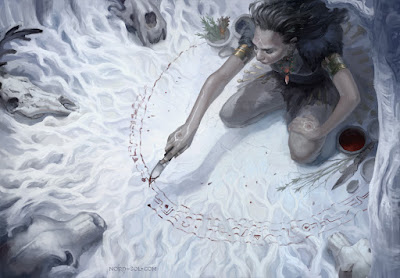 Here blood cannot keep its secrets. One who been taught the ways of Dinsu can recite your lineage by tasting a drop from your finger, or sniff over a scene violence to know the face of the perpetrator and if the victim still lives.

With the blood of gods, they can work miracles. But not without a price. 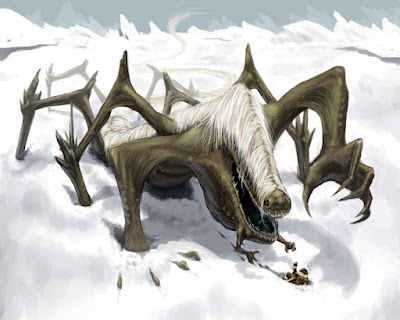 The young man is dressed in a heavy green robe decorated with bands of cloth of gold. He is setting up a small display stand. As he does so he cries out for attention several times to the crowd of merchants before he begins. His tone is stilted. He’s said this a half-dozen times this season alone,

“By a magnanimous edict by the elders of this place, it has been decreed that all outsiders must assent to hear the story of our land’s birth!

The gods of this land are not so far away, as compared to others. Perhaps it is because we are so high up in the mountains? Regardless, they dwell among us. And they were tyrants.

One day, a young couple from the Village of the Deer were running through a meadow at night during spring. They had lost track of time and had tarried in the sacred valley after dark.

The god of that place, a monstrously large creature with the body a reptile, the fur of a yak, and the head of a deer, demanded the young woman give her lover over to their charge in exchange for her own life. In her grief and anger, she refused and struck the god across the face with a thrown rock.

Enraged, the divine beast devoured the girl, and spread her bloody remains across the valley. The young man flew through the night to his village. On his arrival, he told his family, and that of the woman’s, what had happened to her. Soon, the whole village was in a wroth.

The village elders, wanting to know the full story, went to the meadow the next day. They saw the bloody remains, and soon found the god. Asking it why it had done this, the divine beast responded that it owed them no answers, and devoured them as well.

The Village of the Deer forgot their oaths that night. Every man, woman, and child descended on the sacred valley where the god lived. Scores died, but they were able to bind the divine beast to the ground by its own antlers.

They took the blessings that it once hoarded for themselves. They took the valley. Both would be theirs forevermore. 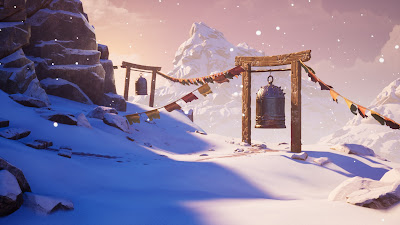